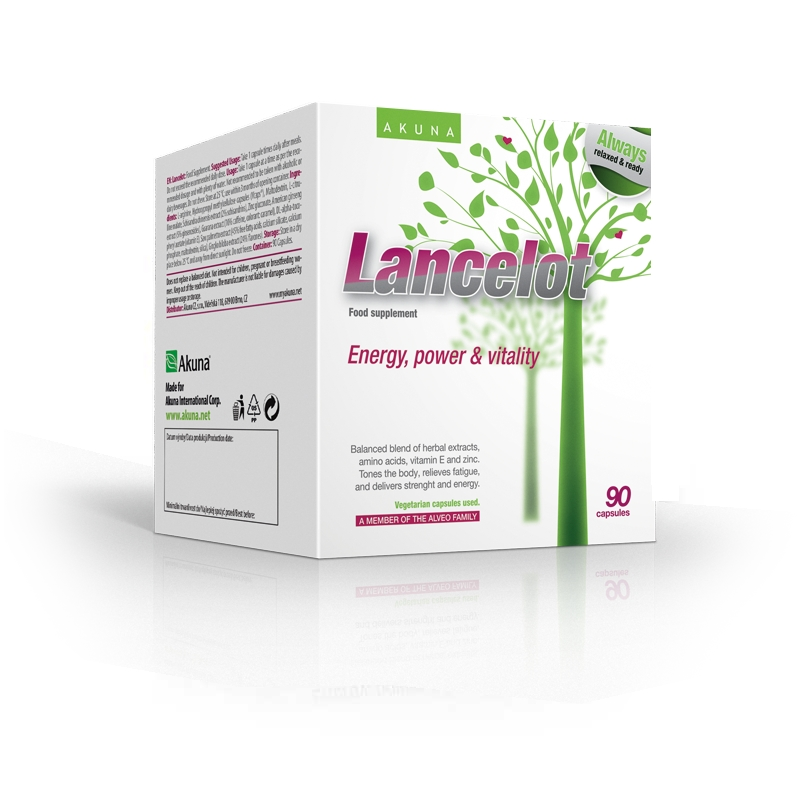 LANCELOT gives you strength and energy
Lancelot is a dietary supplement suitable for adults (not intended for children, pregnant or breastfeeding women) and especially suitable for aging individuals, lacking in strength, power and stamina, or experiencing a slowdown in the function of some body systems. Individuals that are in their physical prime but are exposed to stress or to mentally or physically challenging routines can also greatly benefit from the ingredients supplied in Lancelot.
The capsules contain a balanced blend of Schizandra chinensis (Schisandra chinensis) and Saw palmetto (American dwarf palm) fruit extracts; American ginseng (Panax quinquefolius) root, Guarana seeds and Gingko biloba leaves extracts, and a combination of amino acids, vitamin E and zinc.

This potent formula provides the body with strength and energy, reduces fatigue and occurrence of illness, and strengthens mental and sexual function.

LANCELOT can be combined with other Akuna products. However an individual consultation with an expert on the suitability of each product combination is recommended.
How to use
Effects may be expected after the regular use of 3 months at the recommended dosage. LANCELOT can be used indefinitely or during periods of strain or stress. In such cases, it is recommended to begin use 1-2 months prior the expected strain or stress. Begin with taking 1 tablet 3 times a day after meals and continue during the challenging period and beyond, with dosage of 1 tablet twice a day. Heavy physical exertion, exposure to viral epidemics as well as emotional or personal stress can all burden and cause additional strain to your body.
Food supplement
Ingredients: L-arginine, Hydroxypropyl methylcellulose capsules (Vcaps ®), Maltodextrin, L-citrulline malate, Schisandra chinensis extract (2% schisandrins), Zinc gluconate, American ginseng extract (5% ginsenosides), Guarana extract (10% caffeine, colorant: caramel), DL-alpha-tocopheryl acetate (vitamin E), Saw palmetto extract (45% free fatty acids, calcium silicate, calcium phosphate, maltodextrin, silica), Gingko biloba extract (24% flavones).
Recommended Dosage: Take 1 capsule 3 times daily.Do not exceed the recommended daily dose.

Dosage: Take 1 capsule at a time as per the recommended dosage and with plenty of water. Not recommended to be taken with alcoholic or dairy beverages. Do not chew. Store at temperatures below25°C; use within one month of opening container.

Safety warning: Does not replace a balanced diet. Not intended for children, pregnant or breastfeeding women. Keep out of the reach of children. Store in a dry place below 25 °C and away from direct sunlight. Do not freeze. The manufacturer is not liable for damages caused by improper usage or storage. 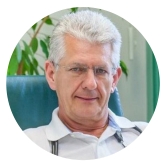 Dr. Kosta is the founder of the cardio-vascular rehabilitation foundation called "New Life" and has dedicated much of his practise to the field of sports medicine. He graduated from the Medical Faculty of Palacky University in Olomouc and has completed internships in Switzerland, Germany and in Israel.
In his professional practice, he has extensively dealt with the issue of macrolides and has lectured on that [top]ic as well as on a healthy lifestyle in the Czech Republic and Portugal. Currently he is dedicating most of his time to oxygen therapy and his private general practice for adults, which he has had since 1993. He is the Assistant Professor at Palacky University’s Faculty of Medicine, at the University of Ostrava and an advisor at the International Clinical Research Center (ICRC) in Brno.
“The idea for a brand new dietary supplement came to us initially in 2006 and no one at the time foresaw how long and challenging the development of this product would be. Originally, we planned on creating a product with aphrodisiac effects, one that would stimulate sexual function. However as the team of specialists grew: an intern, general practitioner, psychologist, sexologist, urologist and representatives of alternative medicine were joined by nutritionists, biochemists, food technologists, and as the extrasensory results and evaluations would determine, it became evident that the product had other significant benefits such as the strengthening of the immune system, reducing fatigue and illness, boosting power and energy.
It would be very difficult to zoom in on any one ingredient since it is the synergy of all ingredients that makes LANCELOT so effective and powerful. However if put on the spot as a parent, who must choose between his children, then I would have to select L-arginine for its support of the immunity system and for the increasing of libido in men and women. Schisandra chinensis acts against stress and promotes mental well-being, American ginseng positively affects concentration and improves both physical and mental performance, while Gingko biloba supports blood circulation, aids memory and cognitive functions, and improves physical and mental health.
In addition to its main benefit, which is to overall strengthen the body, LANCELOT also delivers energy, power and vitality, reduces fatigue, increases immunity, and prevents illness, along with an entire range of other effects. These include: improving sexual function, mitigating the adverse symptoms of both female and male transitions, namely menopause and andropause, harmonizing the body, improving mental state and relieving stress and depression. It is especially significant in the treatment of menopausal symptoms as there has recently been a shift in the use of natural herbal supplements rather than hormone therapies.

The recommended dose is 1 capsule 3 times daily after meals (preferably 20 minutes or longer); begin 1-2 months before expected physical, psychological or medical strain - for example before viral infection, influenza season and then throughout its duration. Outside of such period, take 1 capsule twice a day for unlimited length of use. Effects can be expected after 3 months of regular use, while some people experienced results already after one month.

AKUNA CZ s.r.o. is ISO compliant and ensures the highest quality standards. All individual extracts as well as our final products are continually tested and analysed in accredited laboratories.

Lancelotis a dietary supplement suitable for all age groups and especially suitable for aging individuals, lacking in strength, power and stamina, or experiencing a slowdown in the function of some body systems. Individuals that are in their physical prime but are exposed to stress or to mentally or physically challenging routines can also greatly benefit from the ingredients supplied in Lancelot.”

Known as a growth hormone releaser, this amino acid accelerates cell renewal, plays an important role in supporting the immune system and is responsible for the transport of nitrogen oxides. Lowers blood pressure, has certain anti-diabetic effects, reduces symptoms of weak erections and sexual arousal in men and women.

Known as an efficient source of energy for muscles, brain and heart, this oligosaccharide is a common ingredient in many energy and isotonic drinks. Maltodextrin does not cause any rapid fluctuations in blood sugar levels, as do larger amounts of simple sugars, which may lead to a feeling of hunger, and fatigue. It is not suitable for diabetics – and should be included in daily sugar intake calculations.

The amino acid compound L-Citrulline or Citrulline Malate, an intermediate product of metabolism is a rapid source of nitric oxide, which promotes blood circulation, improves strength levels and endurance and helps reduce fatigue.

A woody vine native to forests of Northern China and the Russian Far East, whose fruits ripen in late summer producing bright red berries gathered in grape-like clusters. It is widely used for medicinal purposes as it contains high amounts of vitamin C, A, E and other elements important for the human body such as calcium, iron, potassium, sulfur and sodium. As a powerful antioxidant and tonic it helps to strengthen the body, counteracts stress and promotes mental well-being. Chinese herbalists use it to treat coughs, insomnia, nausea, and physical weakness. Schisandra is also considered as an aphrodisiac that helps enhance sexual desire.

A perennial herb that grows in the deciduous forests in central and eastern parts of North America plays an important role in Chinese or herbal medicine as its effects are long-lasting and beneficial to health. As an important antioxidant it supports the immune system, mental health and performance and has positively effects on concentration and coordination, counteracts stress, improves physical performance and mental wellbeing.

Known for centuries as the elixir for enhancing immunity, it is climbing plant from the tropical forests of the Amazon. A substance called guaranine is what makes guarana interesting as it is almost identical to caffeine but is released into the bloodstream more slowly making its effects more balanced and longer lasting. Since guaranine appears in the guarana seed completely naturally it has many beneficial effects for our bodies. Guarana helps to maintain physical and mental ability, improves overall body condition, counteracts fatigue and favourably influences sexuality.

An exotic plant from the coastal regions of the southern United States and southern California mostly processed for its purple-coloured grape-sized fruit. The fruit of Saw palmetto has been used in traditional American medicine for centuries as an aphrodisiac and to treat prostate and urinary tract conditions. There are also documented positive benefits relating to the reproductive system, soothing of cough and improvement of sleep, digestion and energy. It is also known to have a beneficial effect on eliminating hair loss in women, a detoxifying effect on acne prone skin, positive health effects on breasts and ovaries and may relieve the menstrual symptoms. It cleanses the liver and the colon, reduces the level of androgens in women, acts as a diuretic and an antiseptic, helps support sexual function and potency, supports and contributes improvement in overall wellbeing.

An antioxidant that promotes microcirculation of blood, aids memory and balances cognitive and mental functions, plays a role in the metabolism of cholesterol and the peripheral circulatory system (eyes and ears), and contributes to overall physical and mental health.

As the most important antioxidant in the body, it protects cells from oxidative stress and the negative effects of free radicals, helping to slow aging and has demonstrated to prevent tumour growth. Has a positive effect on the formation of sex cells, increases fertility and supports the nervous system.

Occurs in relatively large amounts in semen and its sufficiency in food is a prerequisite for proper sexual development and the proper function of male genital organs. It contributes to optimal carbohydrate metabolism, fertility and reproduction, maintains healthy bones, hair, nails, skin and eyes. It also contributes to the normal function of the immune system and protects cells from oxidative stress.