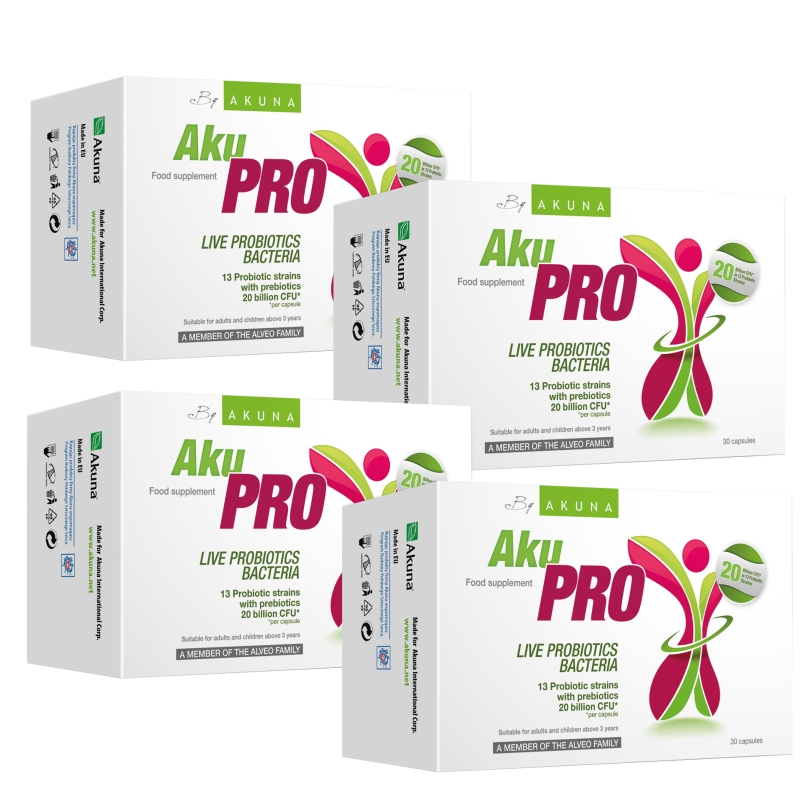 Intestines in the right condition.

AkuPRO contains 13 probiotic strains and the total content of probiotics per capsule is 20 billion CFU*.

What are probiotics and prebiotics?

The word ''probiotic'' derives from Greek and loosely translated means ''for life'. The World Health Organization (WHO) defines probiotics as follows:

Probiotics are live microorganisms administered in adequate amounts that confer a beneficial health effect on the host.

The digestive tract contains a large number of different bacteria. From the medical point of view, it is desirable that the digestive tract be populated with the right or "good" bacteria that protects the body from pathogens, which have a negative impact on the human body. Healthy bacteria are fight pathogenic bacteria and prevent them from multiplying in the intestines. Furthermore, probiotics produce substances as for example certain fatty acids, which reduce intestinal pH and help destroy harmful bacteria.
Another active ingredient is a prebiotic – prebiotics are a healthy non-digestible food ingredient that induce the growth or activity of microorganisms in the intestinal microflora and improve the health of the consumer. The most common prebiotics are inulin, fructooligosaccharides and galactooligosaccharides.

Prebiotics increase the number and activity of bifidobacteria (to a lesser extent, lactobacilli) in the gut.

This is called the prebiotic or bifidogenic effect, which improves the immune system, participates in improving mineral absorption (especially calcium and magnesium) and affects lipid metabolism. In AkuPRO, fructooligosaccharides make up a significant share of prebiotics.
AkuPRO is the ideal combination of probiotics and prebiotics, the body's own bacteria that restore the optimal amounts of healthy bacteria in the human digestive tract, helping to maintain a natural and healthy intestinal environment. Probiotics and prebiotics contained AkuPro increase the strain populations capable of fighting pathogens, thus promoting the body's natural defences. AkuPro can be a beneficial addition to any diet and/or cleansing treatment. AkuPRO comes in the form of cellulose capsules and is therefore suitable for vegetarians.
AkuPRO contains 13 probiotic strains, including strains form the well-recognized genus Lactobacillus and Bifidobacterium. The total content of probiotics per capsule is 20 billion CFU*.
*CFU– number of viable probiotic microorganisms (colony-forming unit)
AkuPRO: dietary supplement. Probiotic Complex of 13 strains of vital microorganisms.

Characteristics: 13 probiotic strains and 20 billion live bacteria per daily dose. Suitable during and after the use of antibiotics. This product is gluten-free.

Usage: Store in a dry place at temperatures between 5°C to 25°C, away from direct sunlight. Do not freeze.
Safety warning: It does not replace a varied diet. Not intended for children under 3 year of age. Keep out of reach of children. The manufacturer is not liable for damages caused by improper usage or storage.
Content: 30 capsules

"Akuna‘s Probiotics product is a highly effective, professionally developed probiotic supplement. The enteric-coated capsules are plant-based and contain 13 different species of friendly bacterial strains with at least 20 billion cells per capsule. They provide the body with a balanced blend of essential species of intestinal bacteria. In my opinion, they are one of the best products on the market, beneficial to everyone and suitable for vegetarians and individuals of every age group."

A widespread strain of the species Lactobacillus. Lactobacilli, lactic acid bacteria, are the main parts of the microflora of the digestive system and are commonly found in the human body. In the digestive tract they contribute to a favourable microbial balance and create a natural barrier to infectious microbes. This beneficial bacteria are highly resistant to gastric acid and is able to survive at very low pH values.

Lactobacillus casei can grow in a relatively wide pH range and can therefore be found throughout the entire intestinal tract. Has positive effects on healthy digestion and the immune system.

Lactobacillus rhamnosus has a high tolerance for bile salts and digestive enzymes. It survives the digestive process and kills bacteria that cause severe diarrhoea. Suppresses hypersensitivity and allergic reactions (food allergies) and also helps with lactose intolerance. It is stable at a wide range of temperatures and pH levels.

Bifidobacterium breve has the unique ability to metabolize large amounts of food matters as for example vegetable fibres that are under normal conditions considered indigestible.

Lactobacillus acidophilus the best known and most commonly used probiotic from the genus Lactobacillus. It inhibits the growth of harmful and pathogenic bacteria and due to a significant production of lactic acid, it lowers the pH in intestines.

One of the most important and dominant bacterial strains inhabiting the human digestive tract. Has a positive effect on the normal and healthy functioning of the digestive tract, inhibits the growth of harmful and pathogenic bacteria, and also strengthens the immune system.

Gram-positive, anaerobic bacterial strain inhabiting the gastrointestinal tract of humans and other mammals. Participates in the maintenance of intestinal microbial homeostasis, inhibits harmful and pathogenic bacteria and modulates local and systemic immune response.

A typical bacterial strain that only exists in the intestinal microflora of healthy newborns, infants and young children. Produces a considerable amount of lactic acid, thereby inhibiting a large amount of pathogens. Is involved in the proper development of a healthy immune system.

Commonly used together with Streptococcus thermophilus as the starter culture in the manufacture of yoghurts. Produces lactic acid, milk protein, metabolizes into amino acids and also produce bacteriocins (substances that are toxic to a variety of pathogenic bacteria).

A less common probiotic strain, characterized by a high natural resistance to antibiotics and various medications. Produces large quantities of bacteriocins, meaning its presence in the digestive tract is toxic for a variety of pathogens.
Streptococcus thermophilus

Has the unique ability to cleave casein (milk protein, which contributes to an allergic reaction to dairy products). Has positive effect on the normalization of the intestinal microflora in case of common gastrointestinal discomforts and more serious imbalances, as for example after strong antibiotic or chemotherapy treatments.